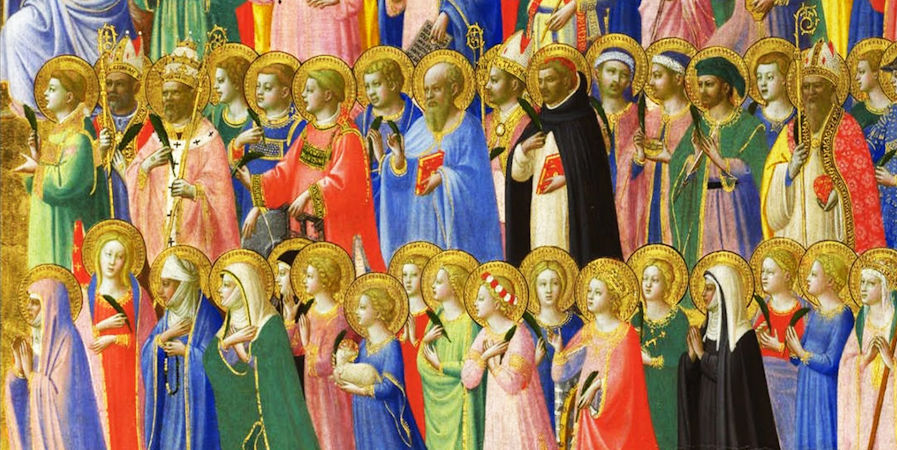 Collect:
Almighty God,
you have knit together your elect
in one communion and fellowship
in the mystical body of your Son Christ our Lord:
grant us grace so to follow your blessed saints
in all virtuous and godly living
that we may come to those inexpressible joys
that you have prepared for those who truly love you;
through Jesus Christ your Son our Lord,
who is alive and reigns with you,
in the unity of the Holy Spirit,
one God, now and for ever.

The Epistle:
Revelation 21.1-6a
The New Heaven and the New Earth
211 Then I saw a new heaven and a new earth; for the first heaven and the first earth had passed away, and the sea was no more. 2 And I saw the holy city, the new Jerusalem, coming down out of heaven from God, prepared as a bride adorned for her husband. 3 And I heard a loud voice from the throne saying,

‘See, the home of God is among mortals.
He will dwell with them;
they will be his peoples,
and God himself will be with them;
4 he will wipe every tear from their eyes.
Death will be no more;
mourning and crying and pain will be no more,
for the first things have passed away.’

5 And the one who was seated on the throne said, ‘See, I am making all things new.’ Also he said, ‘Write this, for these words are trustworthy and true.’ 6 Then he said to me, ‘It is done! I am the Alpha and the Omega, the beginning and the end.

The Gospel:
John 11.32-44
1132 When Mary came where Jesus was and saw him, she knelt at his feet and said to him, ‘Lord, if you had been here, my brother would not have died.’ 33 When Jesus saw her weeping, and the Jews who came with her also weeping, he was greatly disturbed in spirit and deeply moved. 34 He said, ‘Where have you laid him?’ They said to him, ‘Lord, come and see.’ 35 Jesus began to weep. 36 So the Jews said, ‘See how he loved him!’ 37 But some of them said, ‘Could not he who opened the eyes of the blind man have kept this man from dying?’

Jesus Raises Lazarus to Life
38 Then Jesus, again greatly disturbed, came to the tomb. It was a cave, and a stone was lying against it. 39 Jesus said, ‘Take away the stone.’ Martha, the sister of the dead man, said to him, ‘Lord, already there is a stench because he has been dead for four days.’ 40 Jesus said to her, ‘Did I not tell you that if you believed, you would see the glory of God?’ 41 So they took away the stone. And Jesus looked upwards and said, ‘Father, I thank you for having heard me. 42 I knew that you always hear me, but I have said this for the sake of the crowd standing here, so that they may believe that you sent me.’ 43 When he had said this, he cried with a loud voice, ‘Lazarus, come out!’ 44 The dead man came out, his hands and feet bound with strips of cloth, and his face wrapped in a cloth. Jesus said to them, ‘Unbind him, and let him go.’