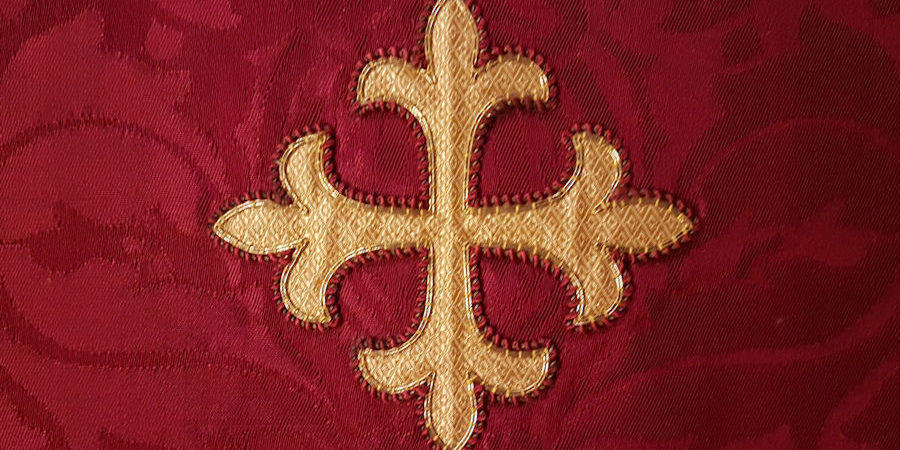 It is still uncertain when Christians first began to make an annual (as opposed to a weekly) memorial of the death and resurrection of Christ. This Pascha (a word derived indirectly from pesach, Hebrew ‘Passover’) was at first a night-long vigil, followed by the celebration of the Eucharist at cock-crow, and all the great themes of redemption were included within it: incarnation, suffering, death, resurrection, glorification. Over time, the Pascha developed into the articulated structure of Holy Week and Easter. Through participation in the whole sequence of services, the Christian shares in Christ’s own journey, from the triumphal entry into Jerusalem on Palm Sunday to the empty tomb on Easter morning. The procession with palms, which was already observed in Jerusalem in the fourth century, is accompanied by the reading or singing of the Passion Narrative, in which the whole story of the week is anticipated. Maundy Thursday (from mandatum, ‘commandment’, because of the use of John 13.34 in the Antiphon) contains a rich complex of themes: humble Christian service expressed through Christ’s washing of his disciples’ feet, the institution of the Eucharist, the perfection of Christ’s loving obedience through the agony of Gethsemane.

After keeping vigil (‘Could you not watch with me one hour?’) Thursday passes into Good Friday with its two characteristic episodes. The veneration of the Cross is older; the sequence of meditations and music known as the Three Hours’ Devotion was introduced into the Church of England in the nineteenth century. The first is now sometimes incorporated into the structure of the second. It is a widespread custom for there not to be a celebration of the Eucharist on Good Friday, but for the consecrated bread and wine remaining from the Maundy Thursday Eucharist to be given in communion. The church remains stripped of all decoration. It continues bare and empty through the following day, which is a day without a liturgy:
there can be no adequate way of recalling the being dead of the Son of God, other than silence and desolation. But within the silence there grows a sense of peace and completion, and then rising excitement as the Easter Vigil draws near.