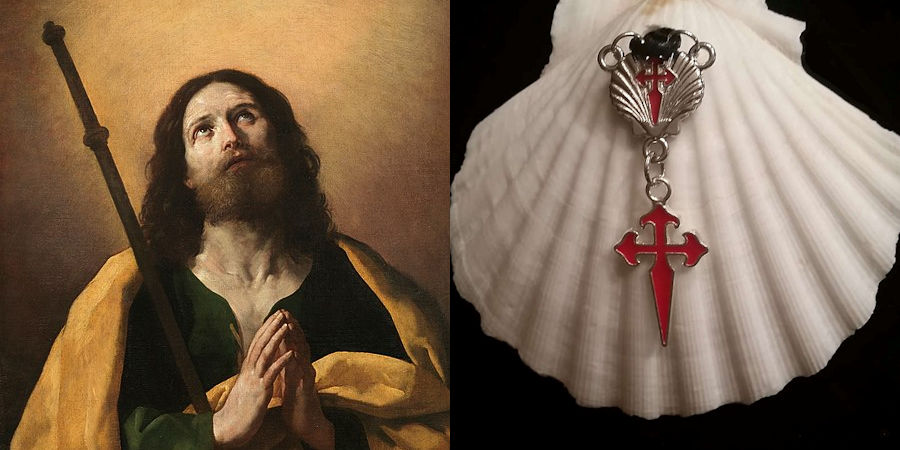 Collect:
Merciful God,
whose holy apostle Saint James,
leaving his father and all that he had,
was obedient to the calling of your Son Jesus Christ
and followed him even to death:
help us, forsaking the false attractions of the world,
to be ready at all times to answer your call without delay;
through Jesus Christ your Son our Lord,
who is alive and reigns with you,
in the unity of the Holy Spirit,
one God, now and for ever.

The Reading:
Acts 11.27 – 12.2
1127 At that time prophets came down from Jerusalem to Antioch. 28 One of them named Agabus stood up and predicted by the Spirit that there would be a severe famine over all the world; and this took place during the reign of Claudius. 29 The disciples determined that according to their ability, each would send relief to the believers living in Judea; 30 this they did, sending it to the elders by Barnabas and Saul.

James Killed and Peter Imprisoned
121 About that time King Herod laid violent hands upon some who belonged to the church. 2 He had James, the brother of John, killed with the sword.

The Gospel:
Matthew 20.20-28
The Request of the Mother of James and John
20 Then the mother of the sons of Zebedee came to him with her sons, and kneeling before him, she asked a favour of him. 21 And he said to her, ‘What do you want?’ She said to him, ‘Declare that these two sons of mine will sit, one at your right hand and one at your left, in your kingdom.’ 22 But Jesus answered, ‘You do not know what you are asking. Are you able to drink the cup that I am about to drink?’ They said to him, ‘We are able.’ 23 He said to them, ‘You will indeed drink my cup, but to sit at my right hand and at my left, this is not mine to grant, but it is for those for whom it has been prepared by my Father.’

24 When the ten heard it, they were angry with the two brothers. 25 But Jesus called them to him and said, ‘You know that the rulers of the Gentiles lord it over them, and their great ones are tyrants over them. 26 It will not be so among you; but whoever wishes to be great among you must be your servant, 27 and whoever wishes to be first among you must be your slave; 28 just as the Son of Man came not to be served but to serve, and to give his life a ransom for many.’